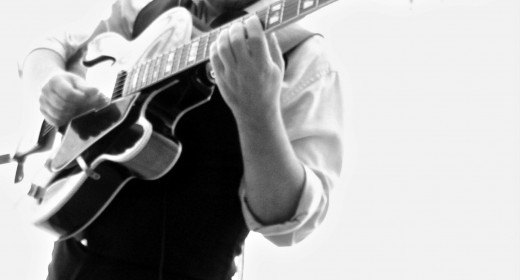 Iggy Luigi Pignatiello is an award winning Italian-British Guitarist, Composer, Free Improviser, Singer and Producer and he is equally renowned as a performer of international calibre and as an inspirational Professor of Guitar in many Institutions in UK and in Italy.

He is a committed versatile and charismatic musician and has played with and written for many distinguished artists from classical to contemporary, from jazz to folk , celtic, and experimental avant-garde. He is not only an astonishing virtuoso player but also prolific multi-instrumentalist and an eclectic electronic musician.

He regularly performs as Soloist, with his Blues and Jazz trios, the IGO Project and his Quintet. His artistic vision led him to embrace a multidimensional career that put him also at the forefront of the contemporary Music scene.

Over the last fifteen years Luigi has written and performed on Soundtracks for films and short films working alongside with director Pasquale Squitieri, in his film “Li chiamarono Briganti” and Oscar Winner Composer, Nicola Piovani.

Luigi was the lead guitar in the Musicals: “Tribute to G. Gershwin – An American in Paris” and “Parlami di me” with Christian De Sica.

He has played with numerous orchestras, including the “L. Da Victoria”, Universe Orchestra, the Bulgarian Symphony Orchestra, the Bosio Big Band. He has recorded for Philology  and Fairyland records and with international artists including jazz and blues stars Nasheet Waits and Jeanne Carroll. In 2002 he played for Nobel Prize Rita Levi-Montalcini and her fundraising campaign for Africa.

Thousands of audiences saw him performing alongside International stars, as well as leading and co-leading successful bands. During his phenomenal career Luigi also shared the stage with the likes of star Police’s drummer Stewart Copeland, recorded a live concert broadcasted by Vatican Radio’s Studios, worked with some of the greatest Italian artists such as Gianna Nannini, Francesco De Gregori and Franco Battiato.

His Instant compositions are hosted twice a month on the Podcast, Music Without Frontiers Show (www.musicwithoutfrontiers.net).

It is known that he started playing the guitar at an early age, under the influence of his father, a mandolin player. Aged thirteen he then undertook his first professional tour.

After tireless years of studying and concerts he decided to have a break. Alone with his guitar he started to travel from country to country, across the continents. It is a musical and spiritual journey at the same time, whose depth will model all of his subsequent experiences. During those years he will be fascinated by the different music styles and repertoires of the places he visited. All that enabled him later on to develop his own personal style.

He was Nominated “Best Guitarist Graduate of the Year” in 1989, and was finalist at the International Massimo Urbani Award.

In 2005 he has been awarded with the honorary citizenship of the Grecia Salentina (South Italy) after his performances at the Taranta Festival in front of about 80.000 people.

In 2005 he recorded his first album as bandleader, Crossworld – Introducing Luigi Pignatiello Quartet, featuring Cicci Santucci on Trumpet and Flugelhorn and Francesco Puglisi on Double Bass.

Graduated with honors in Guitar and later on in Jazz at the Italian Conservatorio di Musica “D. Cimarosa” (Avellino) and “L. Perosi ” (Campobasso), he also holds a Degree in Sound Production and Music Technology from the IMW and City and Islington College of London, as well as a Postgraduate Degree in Music Education.

In 2007 he has produced the sold out Jazz Blues and Gospel Live Event, in Rome at Piccolo Teatro Eliseo featuring Jeanne Carroll and the Arcobaleno Gospel Choir.

He has written Articles and Transcriptions for Guitar Magazine, Celtica Magazine, etc..

In 2010 his app Guitar Wiz for iOS devices, published on the App Store, has been highly reviewed in the music and technology press.

In 2019 his double EP The Six Seasons, featuring London-based trumpet player Kevin G Davy has been positively reviewed by the prestigious British music magazine The Wire.

As a band-leader he has recorded, produced and published:

At present Luigi is actively involved in the promotion of his music, while composing and playing for a variety of projects, sharing joy with his fellow friends around the world.