Some common sense advices for a non-violent world

We are the only living specie who kills others of the same one.

It is very clear to me that the only way to get rid of all violence is to invert the world’s paradigm.

Firstly we must understand that violence has been more or less unconsciously injected on us constantly from our birth. I will explain why.

We all grew up with the idea of having better things for ourselves, than others: better skills, better results, better car, better house, better job, and so on and so on

Competition is the virus that drives our lives.

It is seductively leading us to reach positions where we will be more in POWER and more VALUABLE that others, whatever the cost in terms of “others” might be.

Competition has a back door of cruelty. It will make someone else feeling inferior. There is a violent component in it. And in its name, ethics often succumbs.

Also it perpetuates anxious states in anyone wanted to be “as good as” or even “better than”, instead than to be happily different, unique and similar at the same time, to others.

So for me some of the first things to do are:

Schools need to teach COOPERATION and not Competition to all children.

Scores and examinations need to be removed and the ones who learn faster will help the others. All skill levels will be equally rewarded and positively evaluated.

We MUST introduce Meditation (mindfulness if you prefer to call it that way) and creative arts ( music, singing dance, painting,  etc.) in all schools since nursery

We MUST give all children the opportunity to choose what religion to follow, if any, when they have the majority age.

So if competition is one side of the coin, the other side are subliminal messages.

Subliminal messages, will inevitably lead to develop a violent attitude.

If that might seem an extreme vision, I am inviting you to have a thought about this:

when the anti-smoking campaign started, in USA the law forced the Film Industry to make movies in which no actors could smoke cigarettes anymore. Why?

Because they were aware of the potential risks of unconscious messages.

So if we are really interested in changing the paradigm the same approach must be put into place.

We globally need to force by law the Film industry (and video game and media Industry) to take action and stop creating, promoting and distributing violence on their productions.

Secondly all nations globally, must declare, with immediate effect, illegal to posses, sell, produce and distribuite all sort of weapons.

What do we need weapons for?

They were built by primitive humans to protect themselves from animals in ancient times.

If all nations in the world have no weapons anymore, what or who do we need to protect us from?

Last but not least.

We must remunerate all jobs with equal salaries, whatever it is. No job is more valuable than another.

Without a competitive mind and with equal salaries there will be no career-oriented mind. No violent mind in the end.

A basic income must be given to help people in search of a job, and everyone else during the transitional stage from this money-driven society to the inevitably skill-driven society we will be forced to move towards, when 80% of jobs will be done by computers and AI products.

In a no-money-driven society, everyone will be using his/her skills for the greatest benefit of everyone else.

It is the same approach that Open Source code community has been using for years, but applied to a global scale world system.

If all that resonates with you, feel free to share these advices as much as possible.

None of them are copyrighted. 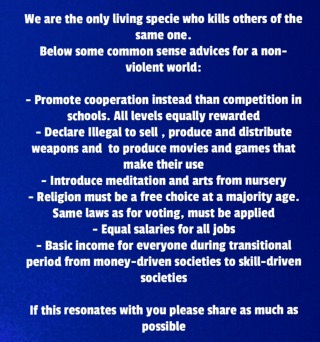