Scientist Prove DNA Can Be Reprogrammed by Words and Frequencies 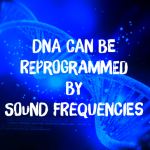 For Russian scientific researchers there is evidence for a whole new type of medicine in which DNA can be influenced and reprogrammed by words and frequencies WITHOUT cutting out and replacing single genes.

Only 10% of our DNA is being used for building proteins. It is this subset of DNA that is of interest to western researchers and is being examined and categorized. The other 90% are considered “junk DNA.” The Russian researchers, however, convinced that nature was not dumb, joined linguists and geneticists in a venture to explore those 90% of “junk DNA.” Their results, findings and conclusions are simply revolutionary! According to them, our DNA is not only responsible for the construction of our body but also serves as data storage and in communication. The Russian linguists found that the genetic code, especially in the apparently useless 90%, follows the same rules as all our human languages. To this end they compared the rules of syntax (the way in which words are put together to form phrases and sentences), semantics (the study of meaning in language forms) and the basic rules of grammar. They found that the alkalines of our DNA follow a regular grammar and do have set rules just like our languages. So human languages did not appear coincidentally but are a reflection of our inherent DNA.

The Russian biophysicist and molecular biologist Pjotr Garjajev and his colleagues also explored the vibrational behavior of the DNA. The bottom line was: “Living chromosomes function just like solitonic/holographic computers using the endogenous DNA laser radiation.” This means that they managed for example to modulate certain frequency patterns onto a laser ray and with it influenced the DNA frequency and thus the genetic information itself. Since the basic structure of DNA-alkaline pairs and of language (as explained earlier) are of the same structure, no DNA decoding is necessary.

One can simply use words and sentences of the human language! This, too, was experimentally proven! Living DNA substance (in living tissue, not in vitro) will always react to language-modulated laser rays and even to radio waves, if the proper frequencies are being used.

This finally and scientifically explains why affirmations, autogenous training, hypnosis and the like can have such strong effects on humans and their bodies. It is entirely normal and natural for our DNA to react to language. While western researchers cut single genes from the DNA strands and insert them elsewhere, the Russians enthusiastically worked on devices that can influence the cellular metabolism through suitable modulated radio and light frequencies and thus repair genetic defects.

Garjajev’s research group succeeded in proving that with this method chromosomes damaged by x-rays for example can be repaired.

They even captured information patterns of a particular DNA and transmitted it onto another, thus reprogramming cells to another genome. All this by simply applying vibration and language instead of the archaic cutting-out procedure! This experiment points to the immense power of wave genetics, which obviously has a greater influence on the formation of organisms than the biochemical processes of alkaline sequences.

Spiritual teachers have known for ages that our body is programmable by language, words and thought. This has now been scientifically proven and explained. Of course the frequency has to be correct. And this is why not everybody is equally successful or can do it with always the same strength. The individual person must work on the inner processes and maturity in order to establish a conscious communication with the DNA. The Russian researchers work on a method that is not dependent on these factors but will ALWAYS work, provided one uses the correct frequency.

And there is more.

The Russian scientists also found out that our DNA can cause disturbing patterns in the vacuum, thus producing magnetised wormholes! Wormholes are the microscopic equivalents of the so-called Einstein-Rosen bridges in the vicinity of black holes. These are tunnel connections between entirely different areas in the universe through which information can be transmitted outside of space and time. The DNA attracts these bits of information and passes them on to our consciousness. This process of hyper communication is most effective in a state of relaxation. Stress, worries or a hyperactive intellect prevent successful hyper communication or the information will be totally distorted and useless.

In nature, hyper communication has been successfully applied for millions of years. The organized flow of life in insect states proves this dramatically. Modern man knows it only on a much more subtle level as “intuition.” But we, too, can regain full use of it. An example from Nature: When a queen ant is spatially separated from her colony, building still continues fervently and according to plan. If the queen is killed, however, all work in the colony stops. No ant knows what to do. Apparently the queen sends the “building plans” also from far away via the group consciousness of her subjects. She can be as far away as she wants, as long as she is alive. In man hyper communication is most often encountered when one suddenly gains access to information that is outside one’s knowledge base. Such hyper communication is then experienced as inspiration or intuition.

When hyper communication occurs, one can observe in the DNA as well as in the human being special phenomena. The Russian scientists irradiated DNA samples with laser light. On screen a typical wave pattern was formed. When they removed the DNA sample, the wave pattern did not disappear, it remained. Many control experiments showed that the pattern still came from the removed sample, whose energy field apparently remained by itself. This effect is now called phantom DNA effect. It is surmised that energy from outside of space and time still flows through the activated wormholes after the DNA was removed. The side effect encountered most often in hyper communication also in human beings are inexplicable electromagnetic fields in the vicinity of the persons concerned. Electronic devices like CD players and the like can be irritated and cease to function for hours. When the electromagnetic field slowly dissipates, the devices function normally again. Many healers and psychics know this effect from their work. Perhaps this is reassuring to read for many, as it has nothing to do with them being technically inept, it means they are good at hyper communication.

In their book “Vernetzte Intelligenz” (Networked Intelligence), Grazyna Gosar and Franz Bludorf explain these connections precisely and clearly. The authors also quote sources presuming that in earlier times humanity had been, just like the animals, very strongly connected to the group consciousness and acted as a group. To develop and experience individuality we humans however had to forget hyper communication almost completely. Now that we are fairly stable in our individual consciousness, we can create a new form of group consciousness, namely one, in which we attain access to all information via our DNA without being forced or remotely controlled about what to do with that information.

We now know that just as on the internet our DNA can feed its proper data into the network, can call up data from the network and can establish contact with other participants in the network. Remote healing, telepathy or “remote sensing” about the state of relatives etc.. can thus be explained.

Some animals know from afar when their owners plan to return home. That can be freshly interpreted and explained via the concepts of group consciousness and hyper communication. Any collective consciousness cannot be sensibly used over any period of time without a distinctive individuality. Otherwise we would revert to a primitive herd instinct that is easily manipulated.

Hyper communication in the new millennium means something quite different: Researchers think that if humans with full individuality would regain group consciousness, they would have a god-like power to create, alter and shape things on Earth! AND humanity is collectively moving toward such a group consciousness of the new kind.

As a rule, weather for example is rather difficult to influence by a single individual. But it may be influenced by a group consciousness (nothing new to some tribes doing it in their rain dances). Weather is strongly influenced by Earth resonance frequencies, the so-called Schumann frequencies. But those same frequencies are also produced in our brains, and when many people synchronize their thinking or individuals (spiritual masters, for instance) focus their thoughts in a laser-like fashion, then it is scientifically speaking not at all surprising if they can thus influence weather.

Researchers in group consciousness have formulated the theory of Type I civilizations. A humanity that developed a group consciousness of the new kind would have neither environmental problems nor scarcity of energy. For if it were to use its mental power as a unified civilization, it would have control of the energies of its home planet as a natural consequence. And that includes all natural catastrophes! A theoretical Type II civilization would even be able to control all energies of their home galaxy.

When a great number of people get together very closely, potentials of violence also dissolve. It looks as if here, too, a kind of humanitarian consciousness of all humanity is created.

To come back to the DNA: It apparently is also an organic superconductor that can work at normal body temperature. Artificial superconductors require extremely low temperatures of between 200 and 140°C to function. As one recently learned, all superconductors are able to store light and thus information. This is a further explanation of how the DNA can store information. There is another phenomenon linked to DNA and wormholes. Normally, these supersmall wormholes are highly unstable and are maintained only for the tiniest fractions of a second. Under certain conditions stable wormholes can organize themselves which then form distinctive vacuum domains in which for example gravity can transform into electricity.

Vacuum domains are self-radiant balls of ionized gas that contain considerable amounts of energy. There are regions in Russia where such radiant balls appear very often. Following the ensuing confusion the Russians started massive research programs leading finally to some of the discoveries mentions above. Many people know vacuum domains as shiny balls in the sky. Now the Russians found in the regions, where vacuum domains appear often that sometimes fly as balls of light from the ground upwards into the sky, that these balls can be guided by thought. One has found out since that vacuum domains emit waves of low frequency as they are also produced in our brains.

And because of this similarity of waves they are able to react to our thoughts. To run excitedly into one that is on ground level might not be such a great idea, because those balls of light can contain immense energies and are able to mutate our genes. They can, they don’t necessarily have to, one has to say. For many spiritual teachers also produce such visible balls or columns of light in deep meditation or during energy work which trigger decidedly pleasant feelings and do not cause any harm.

We have simply made another giant step towards understanding our reality.

Official science also knows of gravity anomalies on Earth (that contribute to the formation of vacuum domains), but only of ones of below one percent. But recently gravity anomalies have been found of between three and four percent. One of these places is Rocca di Papa, south of Rome. Round objects of all kinds, from balls to full buses, roll uphill. But the stretch in Rocca di Papa is rather short, and defying logic sceptics still flee to the theory of optical illusion (which it cannot be due to several features of the location).